When GMU double alumna Kirsten Clodfelter moved to Indiana, she wasn’t expecting to write a collection of short stories about the Middle East. “It just kind of appeared one day,” Kirsten said during a phone interview.

While Kirsten may have been gifted with a flash of inspiration, an interesting web of influences began to emerge in her conversations. “I felt like—our country has been at war since 9/11—and it has affected me in almost no way,” Kirsten said, adding that she found this deeply disturbing. “I felt obligated to make it affect me in a way that was meaningful.” During her last year at Mason, Kirsten took Courtney Brkic’s war writing class, which she described as “phenomenal” and cited as an influence. Further reading led Kirsten to reflect more and more on her relationship to the Middle East, though this wasn’t yet the focus of her work.

But when Kirsten began teaching at Indiana University Southeast and Ivy Tech Community College, she quickly discovered that many of her students were veterans. For the first time, Kirsten was in what she called “daily contact” with people affected by war. One student told her that Kirsten was the first person who had ever thanked him for his service. At that point, Kirsten said, she had to stop talking to him because she was crying. “How is that real? No one ever told you thank you for your service?” Kirsten added that those types of experiences “opened my eyes to what I can be doing as someone who hasn’t been affected in a direct way. I can play a role at home.”

Published by Ropewalk Press, the chapbook Casualties features four short stories, each focusing on the current wars in the Middle East. Kirsten says that most of the stories investigate “what wars are like from the perspective of people who are at home during war, waiting for people to come back.” Here is an excerpt from the story “What Mothers Fear”: 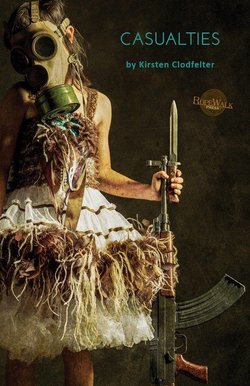 “In crisis, it’s hard to measure time outside of minutes. But if we make it to the end of the day, if we make it out from under this table, how much of my son’s life will be spent taking cover behind furniture, waiting for the ground beneath him to still?”

Kirsten describes her work as a balancing act between giving voice to those who lack it and not overstepping her boundaries. “I don’t ever want to misappropriate anyone’s culture or anyone’s experience,” Kirsten says, “but it’s hard because I want to be a champion or advocate.” Kirsten was able to complete the book—and to feel comfortable writing from the perspective of a Palestinian woman—by conducting an amazing amount of research. She researched the distance between military bases, the types of bombs used, and she calculated what could have realistically happened. “I wanted things to be as authentic as possible in that way,” she said.

But more than research, empathy allowed her to write the stories in Casualties. “It’s only in the past couple of years that I’ve started thinking about my platform,” Kirsten said. “A lot of people don’t have a platform, and they’re usually the ones that need it the most.” For example, she expressed frustration with Americans’ general lack of concern for the “regular people” living in Palestine who are so traumatically affected by war. “Those people are not terrorists,” Kirsten said, adding that war is terrible for everyone, “and to say that’s not the truth is a real denial of reality.”

Kirsten said that as a result, she feels an “ethical responsibility” to those people who do not have a platform. And while she struggles because she knows that she doesn’t have the authority to speak for them, she is able to surmount this obstacle with empathy. “Empathy is super important to me; it’s more important than anything,” Kirsten said, adding, “This book was a whole project on empathy.”

You can learn more about Kirsten, and read her blog, by visiting her website http://www.kirstenclodfelter.com/.