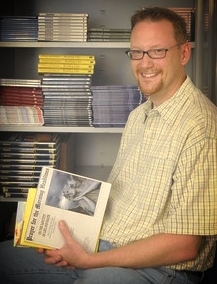 Gregg Wilhelm, who will become the new director of Mason’s Creative Writing Program in May, will be joining us at AWP on Thursday night, March 8, for our reception and reading—5-7 p.m. at Bernini or Ybor, 1702 East 7th Avenue in Tampa, co-hosted by Stillhouse Press. Bill Miller, the Creative Writing Program’s longtime director, will introduce Gregg at this event. Featured readers include faculty member Kyoko Mori, current poetry student Kristen Brida, fiction alum John Copenhaver (reading from his just-released book Dodging and Burning), and Stillhouse press author Dan Tomasulo (author of American Snake Pit: Hope, Grit and Resilience in the Wake of Willowbrook).

Gregg Wilhelm is a writer, publisher, teacher, and arts administrator with more than twenty years of experience in the literary arts.  He has worked for independent publishers as an editor, designer, and marketer. In 2004, he founded CityLit Project, a nonprofit literary arts organization, and launched its CityLit Press imprint in 2010.  For the last five years, he has served as Director of Marketing and Enrollment Development at the Maryland Institute College of Art. Gregg earned an MFA in Creative Writing from the University of Tampa.

Gregg will also be available late morning and early afternoon Thursday and Friday at Mason’s booths in the AWP Bookfair—booths 1224 and 1226. Throughout the conference, those booths will also feature representatives of Fall for the Book, Stillhouse Press, Phoebe, So To Speak, and Gazing Grain Press.

Several Mason faculty members will be taking part in panels throughout the conference as well—along with one Stillhouse Press author, Anna Leahy, co-author of Generation Space: A Love Story:

R174. In Search of Our Essays’ Mother(s): Women and the History of the Essay. (Jenny Spinner, Kyoko Mori, Angela Morales, Mary Cappello, Jocelyn Bartkevicius) While we celebrate this “Golden Age for Women Essayists,” we note that women essayists other than Woolf, Didion, and Dillard are largely absent from historical/critical studies of the essay. Our panelists argue for a more inclusive tradition, taking into account how women essayists have successfully handled the special demands of essaying over the centuries. We will offer perspectives on a diversity of women essayists who have shaped the essay’s history and charted the way to our golden present. Florida Salon 5, Marriott Waterside, Second Floor

S267. Passing Into Pages: A Tribute to James Salter. (JT Howard, Geoffrey Becker, Cara Blue Adams, Timothy Denevi, Andrew Malan Milward) “Life,” James Salter wrote, “passes into pages if it passes into anything.” In 2015, the writer of short stories, novels, screenplays, and memoirs passed on, leaving behind traces of a life well lived and the pages of his work. He has been praised as a chronicler of jet fighters also admired for his depictions of the erotic, and as an unparalleled prose stylist esteemed for the finely sculpted quality of his sentences. This panel celebrates his pages and pays tribute to the life left behind. Florida Salon 1, 2, & 3, Marriott Waterside, Second Floor

F289. Donald Justice: An Appreciation. (Eric Pankey, Jerry Harp, Carol Frost, David Koehn) A panel of Donald Justice's former students from both the University of Iowa and the University of Florida will discuss his reputation as a poet, as an expert on poetic form, and as an innovated teacher. Justice has been described by the Poetry Foundation as "one of the twentieth century's most quietly influential poets." The panel will investigate and illuminate his ongoing posthumous influence. Room 13, Tampa Convention Center, First Floor